We did some significant progress yesterday. Bridges over Rivière de la Cabane au Taupier were installed to span the last obstacle on the layout. Now track laying can be done without any further benchwork modifications. That’s a great relief! The update plan shows in red what has been done during the last month. The next step is to build the staging and then, Ciment St-Laurent will be the last part to be done before Christmas, if possible. 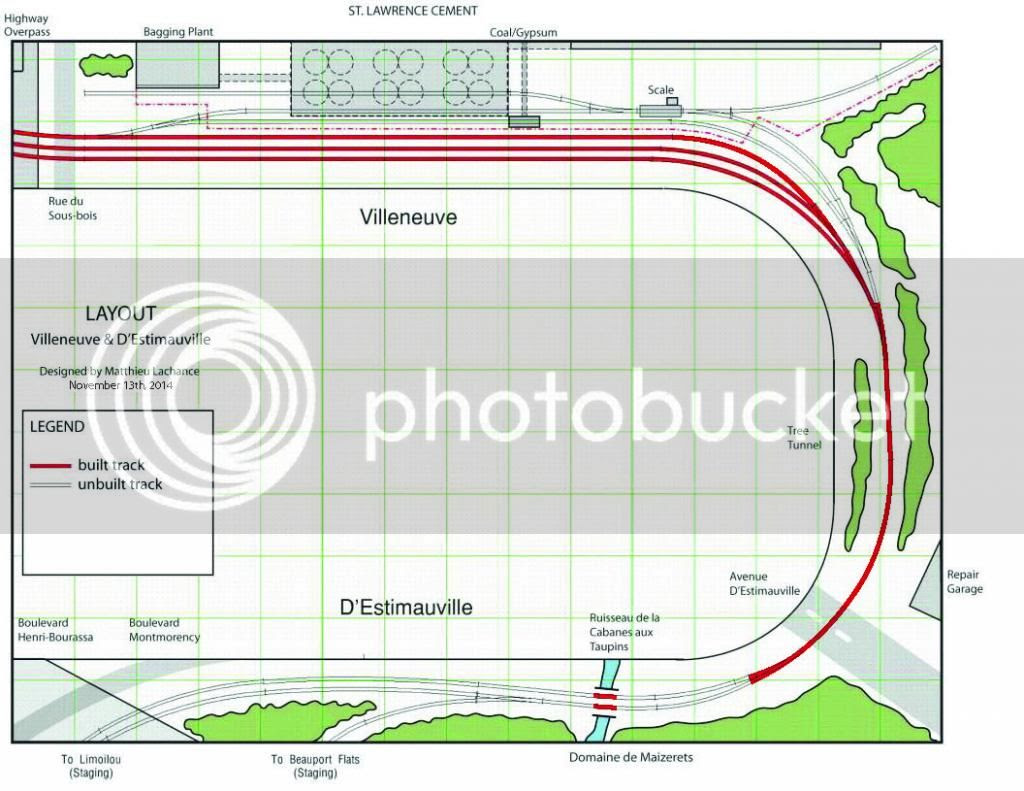 About the river’s name…. Well, it’s complicated. This small brook sported many names over the time and over different geographical areas.

Just to list a few of them: Cabane au Taupier, then Ruisseau La Taupière, Les Taupières, de la Cabane aux Taupières, aux Taupinières, Mastaï (from the nearby asylum) and du Moulin (lots of mills were powered by this river). Out of Beauport area, two names were used: Rivière des Commissaires (Commissaries’ River) in Charlesbourg and rivière Chalifour in Maizerets Domain (the exact location we are modelling).

A “Taupier” is a man whom profession is to eradicate moles. A “Taupinière” is a mole nest. A “Cabane” is a small hut. When you piece things together, it became clear that during the early settlement of the area, a man was hired by local landloard to exterminate moles in the area and a dedicated building to house him stood by the river. With time, the name was corrupt and original meaning lost. Maizerets, then called Canardière was always a large rented piece of agricultural land that served landlords and later Seminary of Quebec. It makes senses that they hired someone to control vermin in the nearby wetlands.

To stay true with history, from now, the brook with be called on this blog “Rivière de la Cabane au Taupier” that I would translate roughly in Mole Catcher’s Hut River which is a colourful name. Mill’s brook and other generic names have no appeal and hardly represent the fact the railway is crossing a wetland inhabited by hundreds of ducks and moles. It is also the name that could be found on Fire Insurances Maps from the 50s.

Model railroading is something very “North American”. Scenery and names can really help to locate it in this particular Quebec City area well-known for its ancient French heritage. I guess most English-speaking readers won’t mind we use “Rivière” instead of “River”. They are basically the same word with almost the same pronunciation.
Posted by Matthieu Lachance at 8:33 AM