Last Friday, I visited Bibliothèque and Archives nationales du Québec (BAnQ) located on University Laval campus. Browsing through their web-based database, I found out they had an interesting photo-report of Ciment St-Laurent plant in Villeneuve dating back to 1958. So, I decided to pay them a visit after work.

Unfortunately, there was no photo in the archives, only negatives. But it was better than nothing and equipped with a light table, I could have a glance at them. In fact, the inverted black & white shades gave them a surrealistic look and a genuine artistic value. The plant – as originally built – is truly an industrial architecture gem. No wonder the photo-report was commissioned by Inventaire des Oeuvres d’Arts du Québec, a now defunct government entity that recorded past and present cultural artefacts in Quebec. Such an inventory still exists in the United States. Unfortunately, Canada and Quebec in particular are always quick to dismiss their own history and identity. I won’t turn that into a political feud – which I always find unproductive – however, there’s always something disturbing about people unable to face themselves in the mirror. It always makes me smile when I hear intellectuals say we are a “new” country with little history, almost a blank sheet of paper you can write everything you want… Well, get real, it’s been over 400 years now and there’s more laying under the surface than one could think of!

That said, information gathered from the negatives is impressive. First of all, the property wasn’t fenced at all back then which made the impression Villeneuve was a 7-track yard (there was no delimitation between private and QRL&PCo tracks). Many types of cars could be seen under the silos, including 40ft OSB wood boxcars, 40ft steel boxcars, slabside hoppers and braced covered hoppers from early CN experimentation with this type of cars. About half cars were boxcars, which is quite impressive but not surprising for that era.

Other pictures shown glimmering rails under overhead wires with silos silhouettes in the background. A nice shot was taken from the back of the plant. Bulk cement semi-trailer trucks were emerging from the silos substructure while railcars were shoved in the background. Interesting pictures included also close up views of conveyor, coal storage area, overhead crane and track scale.

I was particularly impressed with the offices and machine shop buildings. I knew them in their last years, but they indeed were very interesting modern piece of architecture with very slick lines, generous glazing and clean siding materials. I’m not a fan of this architectural era, but I must admit you could sense some thoughts were given when designing them. Unfortunately, industrial pollution, dust and cement particles quickly covered them and we only remember them as grayish dusty boxes with faded green trims. Later modifications wiped out any remaining architectural interest they had retained.

BAnQ staff was kind enough to offer me to scan the pictures, but at 20$ per scan, it would have been quickly prohibitive since about 20 pictures were worth reproduction. Also, when I explained I was working on a scale model of the plant, they told me if I worked with their pictures, I would need a licensing agreement to show the model in public or publish work about it. I find that claim quite dubious since it means most people detailing cars from archives couldn’t publish their work without such licensing. It makes no sense to me, since the model would be mainly designed from other source material like Insurance Maps, Google Earth, Bing Maps, personal pictures and from other people. Anyway, I preferred to not venture in that mined field!

When leaving BAnQ, it was clear that modelling the offices and machine shops would be a must on the layout. Fortunately, Bing maps have recorded these building just before they were slated for demolition a few years ago. It’s more than enough to make a decent model of them. 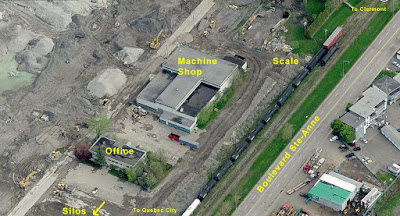 Now, the real issue is finding a way to get a decent picture of the kiln building in the background. Most pictures of it are low resolution and heavily slanted. Even in Photoshop, there’s little to do about them.  And if you talk about the kiln, you also need to put in the large kiln stack that towered at 450 feet. My grandfather built the foundation forms of that stack back in the mid-50s. I remember he told us he was a little bit sad it was destroyed after only 50 years. He was told, back then, it would last for a least a century. It was his first important jobs when he moved from Charlevoix to Quebec City. So, for now, my best bet is to find a similar industry and photoshop it into something similar to my prototype.
Posted by Matthieu Lachance at 3:52 PM