I recently revisited my old idea of modelling an entire prototypical mill on a 12" wide shelf recently. While I addressed the track plan, scenery and concept, I didn't venture as far as depicting operations. Meanwhile, I've read some articles about Quebec Central and discovered interesting tidbits of information that makes this layout much more than a small industrial switching layout with a typical scenic staging area.

First, Quebec Central did use to serve this paper mill. It seems there was no industrial switcher working the plant and QC trains en route to Sherbrooke had to do it.

Second, most paper products were shipped via Sherbrooke while some chemicals came from that same direction. 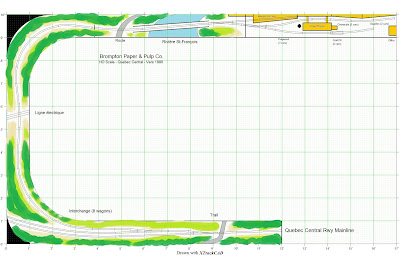 Third, raw supplies including woodchip and other products came from QC interland beyond St- Georges.

Put together, these elements means the staging area is no longer a soulless and practical area, but rather participate to the story. At the beginning of an operation session, some cars would be left on the siding. These would have been dropped by the train coming from Sherbrooke. Typically, we could assume some chemical tank cars, covered hoppers, empty newsprint boxcars and possibly woodpulp. On the mainline would be staged a train coming from QC interland (Vallée-Jonction). This train would have a new supplies and many woodchip boxcars.

Now, our train would have to build a short consist with all inbound cars for Brompton Paper, then move down the spur and switching empties and loads. On the return trip, cars would have to be sorted on the siding according to their final destination. Then, the session would end when the train would be ready to leave East Angus.

Nothing complicated, but enough to model the entire job without compromise.

Finally, the last point would be to decide if the track would be level or if this layout could benefit having a grade between both the paper mill and the interchange. In real life, there was a somewhat steep grade between them. I suspect it could be an interesting challenge if not overdone and a good occasion to put LokSound Full Throttle capabilities into action. But this is the kind of stuff that can quickly become annoying in the long run.
Posted by Matthieu Lachance at 8:43 PM