As you can guess, Easter holidays have been spent wasting time designing track plans that will never be built. It seams I can escape that fate and will revisit my designs until the end of time!

Joke aside, I thought about refining the last track plan I made of Brompton Paper. As you, this is a small (yet prototypical) paper mill served by only a handful of switches facing the same direction. This is as basic as can be yet, quite interesting. I know from experience operating doing on the club layout that you don't need that much. Also, since we reworked Clermont yard, it has been quite clear the idea of shuffling cars between an interchange point on the railway and the plant is quite an interesting move. 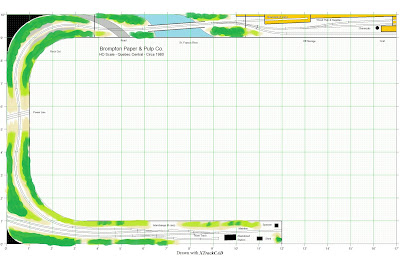 Last time I put any effort on Brompton Paper, I did a mistake by making the track plan far more complicated than it needed to be. Fear got the best of me... I thought it would be a pre-requisite to have a runaround, which doubled the number of turnouts. However, I liked the idea back then that I should have the interchange modelled. It was now time to see if I could streamline the concept in such a way it would fit a very narrow shelf (no more than 12") along the walls of my new hobby room. Also, a key element was that I didn't want any cassette and hidden staging.

So here we are with the new version. The plant is now quite simpler and closer to prototype. I also placed the large steel bridge over St. Francis river where it should have been from the start. Then, a very narrow shelf (not more than 12") link the plant toward the interchange on Quebec Central mainline in East Angus. Since I don't need to turn locomotive around the train, I saved a few turnouts and was able to replicate a real functioning interchange yard based on the prototype. A few small structures including the dilapidated passenger depot gives a sense of place. The team track is there for the show, mainly to let a few cars rot there as background decoration. 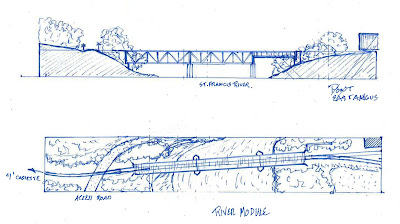 However, what I like is exactly the lack of stuff. Between the plant and the interchange, there is nothing to notice. A mundane power line, a minimalist rock cut and a sweeping curve as the branchline connect with the main. I imagine a lot of wooden area, wild grasses, bushes and electric poles. Also, the distance between both location is realistic, about 1800 feet in "real" life. This is the kind of distance often seen on prototypes to reach a plant. Also, the way the layout is arranged in a U-shape makes it easy to feel we are indeed going on the other side of the river to reach a customer.

Worth mentioning is the possibility to only build the mill side of the layout. It would be fully operational without problem. The other part is mainly to give a purpose and a sense of going somewhere.

Posted by Matthieu Lachance at 7:56 PM