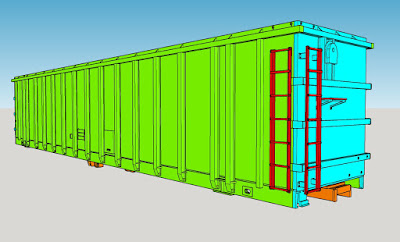 Over the last week, I've reworked my prototype of CN 878000 (CN RAIL version) woodchip car. The original 3D model was done about 5 years ago and it was time to upgrade some details and set the bolster and coupler pocket at the right height. 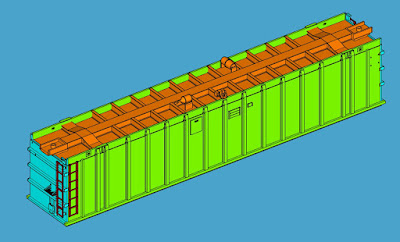 I'm kind of happy both models are now done and they will soon be printed. When assembled, I'll be able to make some fine tuning before going forward with production. Still a lot of work to do, including drawing the photoetched parts and making decal artwork. I suspect I have probably a good month of work in front of me. 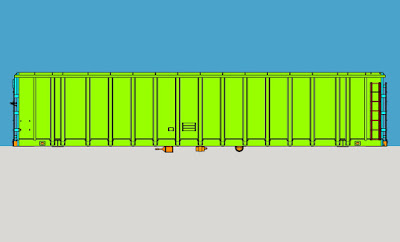 Meanwhile, I've discovered some discrepancies between my model and the prototype while reviewing pictures for artwork purpose. It seems series 379000 cars had fishbelly sills. Almost unnoticeable, but once you see it, it can't be undone. I'll have to rework the 3D model accordingly. 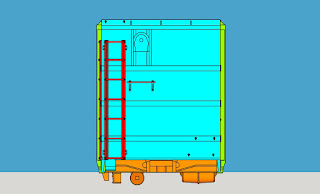 I've yet to decide how much cars will be produced and I'm still trying to figure out the market for such a kit. So far, I know it would be safe to produce a 50-car run for each car, meaning a total production of 100 cars. Cost wise, it would be the threshold to optimize prices.

Another option is doing a 250-car run for each prototype. Kits would feature better detail and a one-piece body, limiting assembly to adding details. From a cost perspective, I could get better prices, meaning the model could be sold at a decent price. It also means modellers would have an easier time building the cars, making it much more attractive.

As for decals, it seems the cost would be about $7,50/car. I would love to bring that price down if possible.

That said, if I'm choosing the semi-industrial route it could be possible some crowd funding would be required. It also means a lot of work on my side to prepare each kit in a decent manner. At this point, it is no longer a hobby, but almost a job, including business risks.

Whatever my final decision regarding the production details, I expect the total cost for a kit being between $45 to $50. It may sounds a lot for some people, but that's about the price you must expect when buying crasftsman resin kits. Given it would include trucks, decals and most details, I suspect it wouldn't be a bad deal at all.
Posted by Matthieu Lachance at 10:16 PM