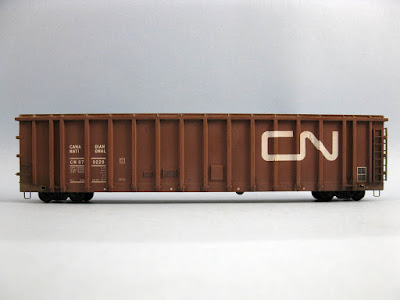 I've been working on-off on this project since 2014. Thanks to fellow modellers Taylor Main, Justin Babcock and Julien Boily, I was able to acquire precise data to refine my models. As of now, both 878000-series and 879000 series are replicated in 3D using SketchUp.

I know there is a lot of interest in this project from many people, both in HO and N scales and I'm eager to finally bring these ubiquitous cars to people who needs them.

If some peoples are interested, I can make the model available on Shapeways. I don't guarantee the printing with be perfect since I did only print my first prototype a few years ago. However, the model respect Shapewars Fine Detail Plastic design guideline and should be OK. Be aware the cost is prohibitive. About $130 per car which is completely absurd if you want to model a fleet. If there is no demand, I won't bother posting the model on Shapeways marketplace.

Toward a Real Product

Having poured countless hours on this project, I must admit I'd like it to go somewhere instead of being buried in my computer files.

Following a discussion on Canadian Railway Modellers Facebook page yesterday, it was evident these cars could be produced efficiently as resin flats to be glued together. Their simplicity makes them ideal choice for an affordable and easy to build kit.

From now on, I'll try to find someone who is interested in producing this line of woodchip cars. I have no idea about the final cost, but if a kit (without couplers and trucks) could be sold at the same price of a quality current RTR model, including decals, it would be acceptable.

If you are interested in acquiring these cars, let me know in the comments.
Posted by Matthieu Lachance at 9:06 AM