Clermont - How to Recreate a Complex Scene?

After completing topography around the small creek, we have now moved on one of the biggest scenic challenge on the layout: Clermont itself.


This scene has been a headache since we decided to include it more than 4 or 5 years ago. The reason is simple: space is lacking, track is curving inward and the scene is mirrored. Given these limitation, it is really easy to overcrowd the area and get a cute little Walthers Catalog village. Not exactly what I have in mind!


Back in the days, we dodged the issue by creating a bogus scene that caught the spirit of the place but was quite nondescript. Now, it's time to figure out a way to make things slightly more prototypical.

Clermont is complex and can be divided in a few key elements that gives it its personality. First, the grade crossing is located at a complex road intersection where two steep roads converge. It results in a very large expanse of asphalt. 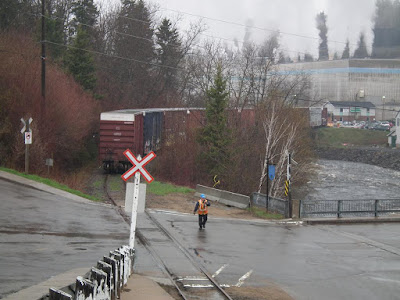 Second, a large stone retaining wall is located against the tracks and create a prototypically clearance issue. 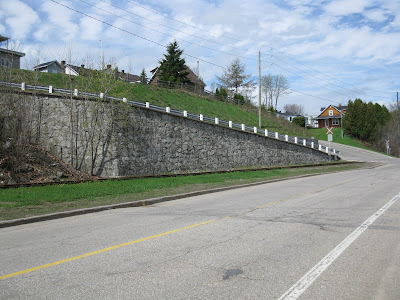 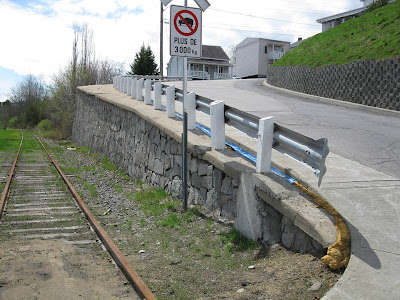 Third, a few working class houses are high perched on the hills, hinting at a small industrial town over there. 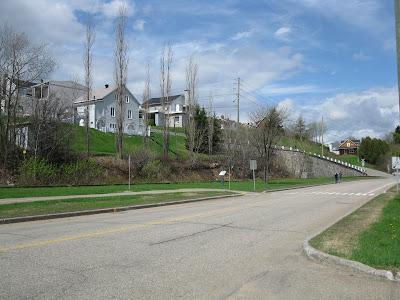 To conspire against these characteristics are the peninsula limitation. There is about 1 feet of scenery available to work out a road between both tracks there. Not exactly the best place to make a road disappear seamlessly into the woods. Can we manage to do it? Maybe. At least, this partial conclusion was reach after a 5 hour long brainstorming session last night. 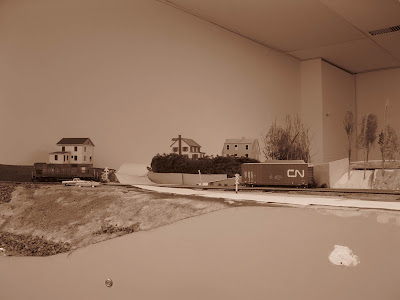 After several tries, we concluded the main road should follow the previous road alignment that we built years ago. The reason is simple: it is the only place where your eye is naturally drawn to the scene. Otherwise, it will look weird. 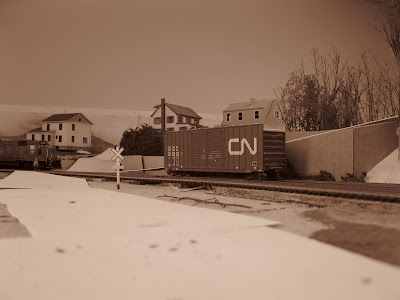 We also came to the conclusion about 3 houses were enough to give an impression the railroad has now reached an urban area. Working with prototype pictures, a few of these houses will be built. They will also be visible from the other side of the layout, but it won't be a problem since a few houses could be seen from there too. 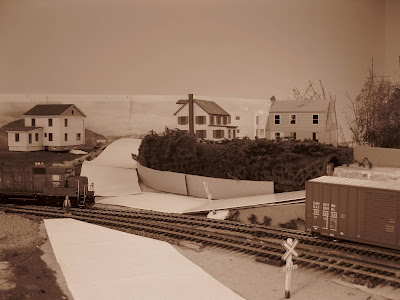 Finally, it was decided the road with the retaining wall wouldn't serve any house so we will have much more space to create the illusion this street is disappearing. 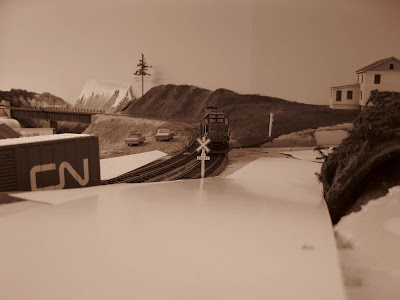 One thing we learned from the exercise was to keep visual elements at minimum. Even the treeline will have to be carefully located. If trees are too high, everything looks cramped. Also, color palette will have to remain extremely limited and toned down to not draw attention to individual elements, but rather creates an impression of unity. Houses will be off white and light gray, covered in cheap materials (vinyl imitation clapboard, non-descript PVC and aluminium windows, generic asphalt shingle roofing). 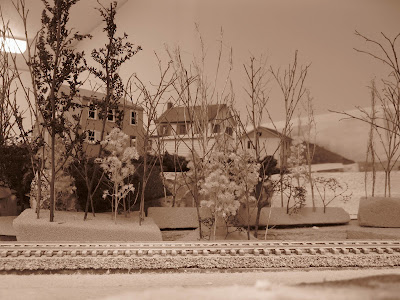 To get a better sense of the results were are looking forward, we shoot mockup pictures using the sepia mode. It really helped to mute the color palette and better analyze how components work together. The new steep road has also help to recreate an iconic real-life railfanning spot on the layout!

Posted by Matthieu Lachance at 10:30 AM