Clermont - Refining The Role of Scenery

Most people must be astounded how slow we are setting the landforms on the layout... It's been more than a month and while we worked every Saturdays for several hours, very little tangible results can be seen... or this is what you could believe.

Scenery is a mysterious thing. Really, this is probably one of model railroading most challenging aspects, at least the most artistic in nature. It means that not only you need a decent mastery of various techniques, but you have to make extremely subjective choices that no one else can make for you.


Replicating a scenery to the perfection is rarely an available option and thus, you can't escape long sessions trying to figure out how elements can be put together in a different way while still being relevant to the emotion you want to transmit.

First, why emotion? Model railroading is, in a large part, a matter of emotion and sensibility. Every railfan has a particular and very personal interaction with trains that define a set of emotions that makes him develop a passion. Most of the time, these emotions are hardly defined and are subconscious in nature. However, take them away and the hobby come to a stall, just like a locomotive losing its priming mover. An interesting thing is how many fans of trains will start to see beauty in industrial, rundown and rough environment and machinery. I'm not just talking about the sheer enjoyment of mechanics, but truly how rust, faded paint, oil spills, under-maintained structures and less than optimal landscape can gain an artistic value by themselves. That is truly the beauty of this hobby, how we can transform a pile of vile things into gold.

For this reason, having a clear vision for Clermont takes time. We have made a small mockup a few week ago of how the 2 slopes converge toward the railway track and have been spending many hours looking at it, trying to improve the look but also the vibe we can get from this scene.


A key ingredient has been to not rush the process. When in doubts, we leave it alone and come back a week later. Last Saturday was interesting. When the session started Jérôme simply said: "I know you'll hate me, but I feel the scene is too much crowded but I can't pinpoint the specific reason." I then removed a house and replaced it with a small garage... Bingo! The visual balance was restored and now, the structures and roads worked perfectly bring creating a real scene of depth and perspective. If we had rushed, we would have never seen it. 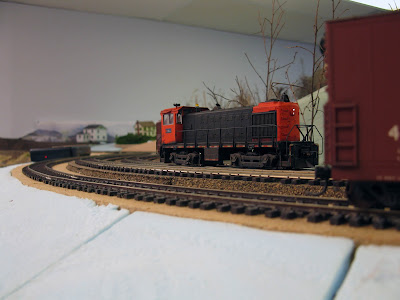 Another nice discovery was when I looked at my pictures today. I had shot a consist passing behind the old shed at Desbiens Street without specific goal if not experimenting a new angle to frame my subject. To my surprise the new lower ridge in the middle of the peninsula made Donohue's smoke stacks visibile in the background through the tree line. Without knowledge, I had achieved "shakkei", that Japanese visual concept of reusing and stacking together distant and unrelated objects to create depth to a composition. What should have been a 16 inches shelf became instantly a 1 km deep panorama telling a story. Donohue is indeed visible in many part of Clermont and achieving this was pure serendipity. If we had not removed one house a few hours before, we wouldn't have achieve such a thing.


Another lesson learned was that a relatively low central ridge separating each side of the peninsula doesn't make immersion into the scenery less efficient. When operating yesterday, it was clear our eyes were mainly focussed on the right of way and everything outside blended together nicely. We thus feel having to create an opaque barrier between scenes isn't required and could, in fact, remove the depth we discovered by chance.

Posted by Matthieu Lachance at 8:03 AM