As I recently said in a previous post, most grain shipment to Agrivoix Coop in Clermont will be handled by boxcars. When thinking aboug grain, most Canadians and Americans quickly think about strings of covered hoppers in varied paint scheme. Among these cars, the extremely attractive Canadian cylindrical hoppers – still in service after more than four decades – have garnered a large fanbase all over the continent and even oversea.

However, as much as I love these cars and that they were my first serious Internet search on Altavista using a 3.2 Netscape browser in 1996 in high school (even going as far as making a website partly dedicated to them), it would be far-fetched to imagine them visiting Murray Bay subdivision by dozens. While they could have ventured there, one must keep in mind most feedmills in the area were extremely small and with limited storage capacity. Also, weight restriction that plagued the line until the 1980s could have prevented their use up there.

Another reason I refrain from using them on the layout is because most people’s memories or freight trains over Murray Bay (including mines) are devoid of such car. Covered hoppers only started to appear frequently during the mid-1990s and were bound to the papermills (Donohue and Abitibi-Price). Some pictures from the 70s taken by Denis Fortier indicated CN covered slab hoppers did venture on Murray Bay far from Ciment St-Laurence, but they were indeed in cement service to various clients.

Generally speaking, if I could describe in one word a train on Murray Bay during from the 1960s to the 1990s I’d say “Brown”. Brown boxcars, brown gondolas, brown hoppers, brown flatcars… with a red-orange caboose. I thus want my grain cars to merge seamlessly into that general paint scheme.

By great luck, I own three CN grain boxcars with the correct paint scheme in use during the 80s. One is an old Athearn BB car while the two others are late run Roundhouse kits got from River City Railroad on Ebay. As a matter of fact, the Roundhouse cars (latest retooling) have finer details than the Athearn car and I will only work with these two. However, there can’t be used as is and some details must be canadianized to make them looking more prototypical while being less toyish.

The first step is to remove the roofwalk and end supports, then plug the holes. Nothing serious here since it’s a standard modelling procedure for anybody replicating older boxcars in a more modern era.

Another detail that much be taken care is the ladders. Canadian boxcars are well known for their 8-rung ladders combined with a stirrup. This kind of detail is extremely important to make you believe the Roundhouse car is a better quality car. It means these details must be removed – which is a labor of love – and replaced with new ones, namely Tichy ones.

Some other issues have to be addressed, but the biggest one is the painting. For unknown reason, the CN wet noodle on one of the car is vertically compressed. The logo thus looks flat and deformed which can be a liability when running next to a correct car. I tried to erase the artwork on one side by scraping the white paint, but finally decided to wet sand it using Walthers Solvaset. It always works quickly and quite well leaving minimum defect on the surface.

Repainting the ladders and boxcar sides turned out to be less a serious challenge than I thought. Using several shade of acrylic paints, I tried to match the car's factory color. It is easier than you could think and I generally do my test on the roof because it can be hidden better and easier with a fresh coat of paint once the correct color is selected. In fact, in a matter of five minutes, I knew what mix to use and I'm more than happy with the result. Once weathered, this car will look as if no such surgery ever happened. 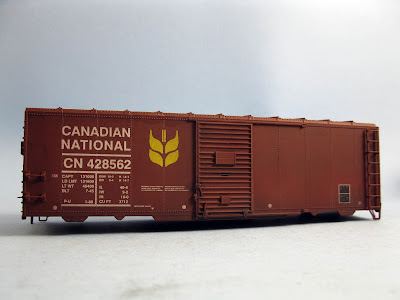 Finally, some modeller recently gave me a set of old decals including yellow wheat sheaves applied on boxcars during the 80s. Since I have several Intermountain 40ft boxcars custom painted in the old CNR Maple leaf scheme, I’m thinking about upgrading at least one to have some variety on the layout. 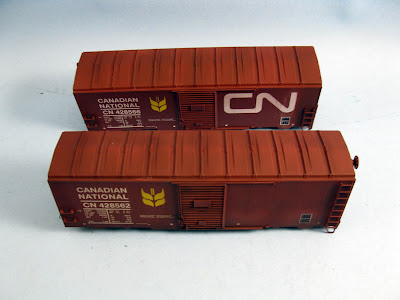 Posted by Matthieu Lachance at 4:58 PM