A few weeks ago, fellow Canadian modeller Taylor Main offered to build a custom-built turnout to replace our geometrically awkward Shinohara one in Clermont.That old turnout was a real liability when switching because the frog was too sharp. 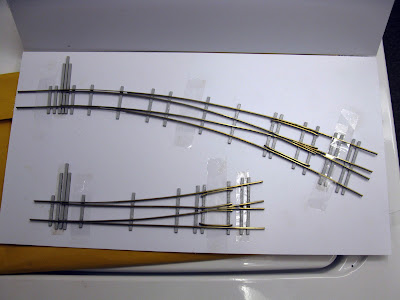 Thursday, Taylor's turnout was in the mail box and ready to be installed. This time, the frog is a #8 which is our mainline standard on the layout. 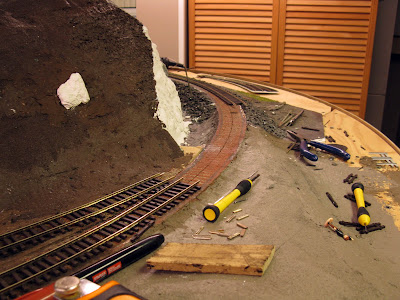 Friday night, Jérôme worked for quite a while to install the turnout in place. The first problem was that our theoritical 24" radius on the peninsula is probable sharper and we had to fudge a little bit the tracks to make a gentle curve. I take the blame for that, it was my fault not measuring the actual radius of the curve. Fortunately, the roadbed was wide enough to accommodate some tweaking. 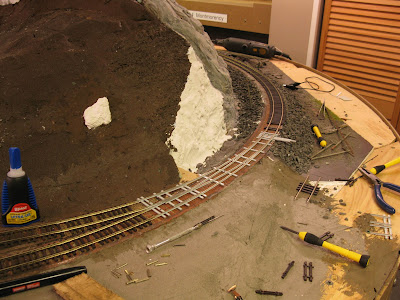 When turning the power on, a short occurred. It seems a PC board tie copper plating wasn't completely scrapped off. Once done, it worked nicely. Some further tuning will be required, but so far, the new handlaid turnout is a serious improvement over the factory-built one. We all wish to thank Taylor for his generosity. He took off a serious block on our road to completing the scenery in this particular area. 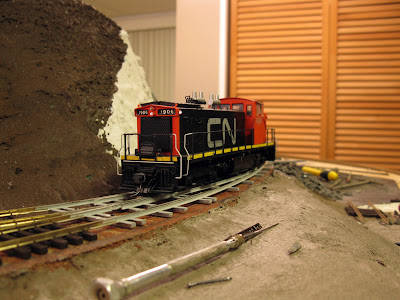 With the new turnout was also an occasion to see if a 6-axle GMD1 could enter the siding without derailing. The answer is a mixed bag and the center wheel almost derail on many occasions. I think it's now clear our layout isn't meant to run 6-axle locomotives. But at least 50ft boxcar now looks less silly and that's what truly matters to us. Hard to believe no so long ago, I still thought curved turnouts were could and should be used more... I no longer agree and think they should be used only when there's no other option, just like the real railroads.

While Jérôme worked on track engineering, I glued in place a set of plaster rock castings I made this week. A friend of mine bought a dozen of Woodland Scenic molds a few months ago and I decided to make a few ones to see if Clermont scene could be improved. 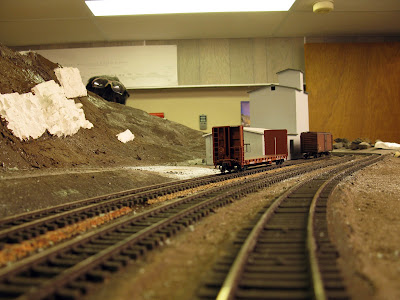 After some discussion with Louis-Marie, we settled on a final arrangement of rock outcrops. It may look silly right now because of the white color, but we placed them following what looked natural and working with the pictures taken before we removed the blue foam cliff. 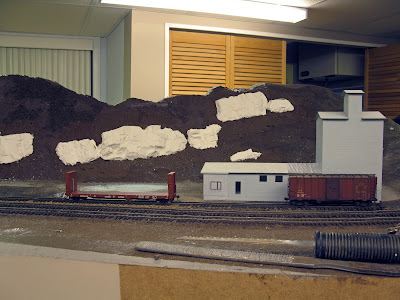 Keep in mind these rock outcrops will be very dark granite buried in dead leaves and dozen of trees and bushes.Our goal wasn't to create a big large cliff, but rather what you would find in the typical rural landscape of Charlevoix. 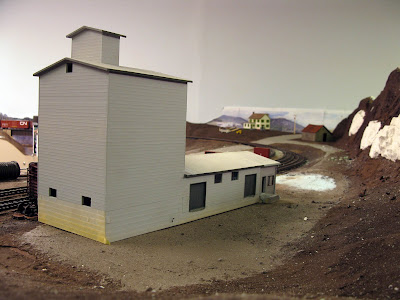 It was also a good occasion to put the feedmill in place to test the new colors. I also decided to modify the feedmill access road in such a way it would became a loading area for the team track. Removing the universal mud (papier mâché + latex paint) wasn't easy, but it looks now more natural and add a need car sport in that area.
Posted by Matthieu Lachance at 2:11 PM