Whatever the outcomes of that crazy American election saga, when I'll be asked what I was doing that evening I'll say I was scratchbuilding a feedmill for my HO scale layout. Yes sir, a HO scale feedmill in cardboard! But not any insignificant feedmill...

Better known as Coop Agrivoix since the late 20th century, the Coopérative agricole de Charlevoix (located between Clermont and La Malbaie) was founded in 1940. It was still rail-served during the mid-1990s according to CFQ timetables but it doesn't mean it was still receiving goods by then.

As I mentionned in a previous post, my take on this particular industry is far less prototypical than I generally use to. The main reason is the lack of space (oh, what a convenient excuse) and the unforgiving geometry of the peninsula. That said, it doesn't mean the building will be smaller than it should. I based the dimensions on  the real life exemple of rail-served feed mills in Clermont and Ste-Anne-de-Beaupré to make sure the size is believeable. Also, it seems Agrivoix started as a relatively small structure back in 1940 which grew up mainly in the recent decades only. One thing however I must forget about modelling is the bunch of grain bins and surge bins as they doesn't look good according to some of my mockups. Instead, I'll replace them with a good old wood grain elevator. There is none standing in Clermont nowadays, but I suspect one was built back then to be later replaced with more modern steel bins.

As a starting point, I thought about kitbashing the Pola feedmill but gave up. Too much work to make it believeable. I also tried to see if I could do something with a Walthers grain elevator, but this too prooved to be far fetched. Thus I decided to take the easiest way possible: scratchbuilt the structure to fit my own design. Faster and more satisfying. It also helps to give the layout its own personality which is rather hard to achieve with catalog structures. 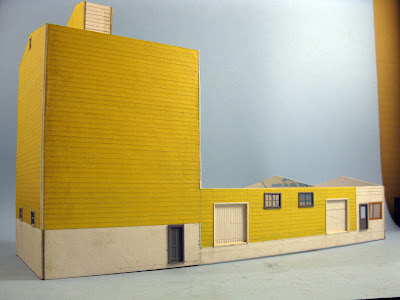 The Coop is made up of three different parts: a 30ft x 30ft grain elevator, a 30ft x 50ft warehouse and a modern 30ft x 16ft office/store. Not a big industry, but with enough presence to guarantee limited rail-service. In fact, I copied the Pola feedmill dimensions and rounded them up to fit real life structures. I also used the Walthers elevator footprint to draw my own version (which is based on Ste-Anne-de-Beaupré feedmill which was built in the same era). These dimensions worked out fine on the layout, why change a winning formula! 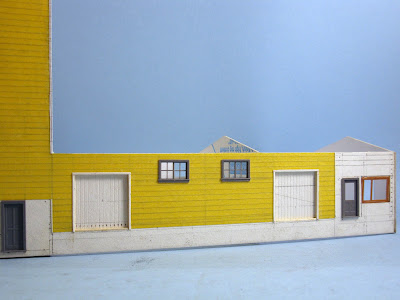 The structure is built of 1.5mm thick illustration board, which I consider a versatile material to work with and relatively easy to cut, particularly window openings. When using wood glue, assembly is fast and strong. As the building take shape, I'll add more bracing to prevent warping. 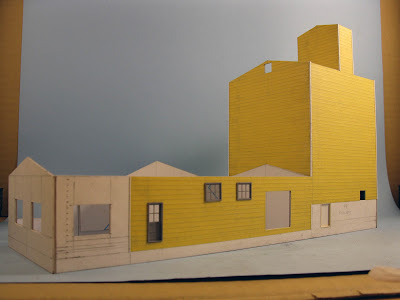 Following the prototype building, the structure will be clad in 10" asbestos shingles which I model using Tamiya tape. Very fast to apply and the rough texture of the tape is perfect for such an application. Roofing will be made out of prepainted corrugated paper sheet exactly as I did with the small shed earlier this month. 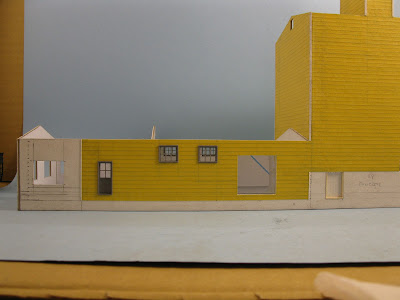 Doors and windows are a mix of scratchbuilt and Tichy parts. For larger wood door, I scribed wood planks with a awl. Then using the same tool, I delicately scratched the surface to create a distressed grain wood. This is similar to the technic generally used for styrene, but the goal is not to tore the cardboard surface but rather press down the fiber to scribe the wood grain. I'm curious to see how it will look once painted and weathered. 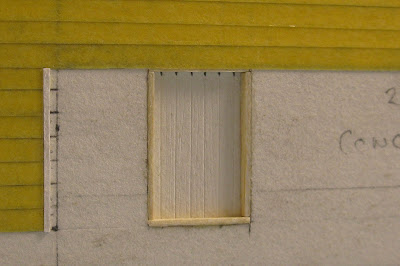 The next step involve adding the roof and internal bracing.
Posted by Matthieu Lachance at 10:16 PM