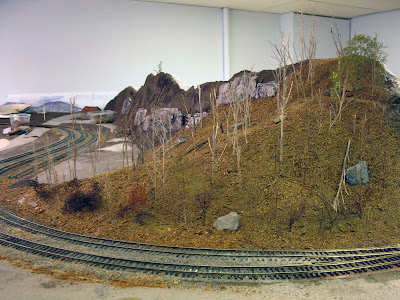 Some evenings very little happens on the layout, some other tremendous progress is accomplished in a matter of a few hours. Last night was one a productive one that improved greatly the scene in Clermont. 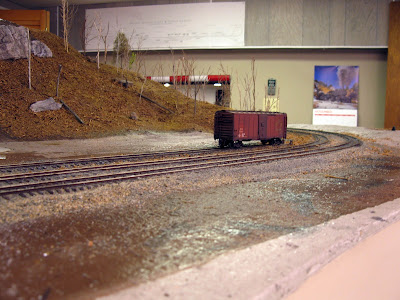 The track ties were weathered with acrylic paints, then ballast was applied when it was paint was dried. Once again, I didn't use any commercial products. I far prefer to mix various kind of real soils so give some variation in shade to the scenery. 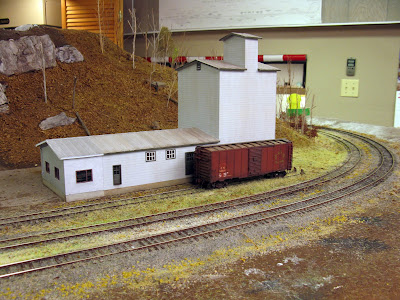 The team track was mainly ballasted with dirt and powdery ballast. The siding got a sand foundation covered with the aforementionned powdery ballast. Finally, the main track only got the powdery ballast with very little hints of contamination where we thought the track would start to sink into mud due to bad drainage. 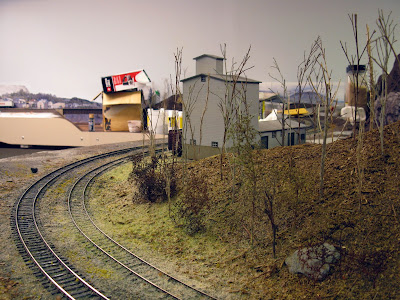 Multiple image of Murray Bay subdivision back in the 1960s up to the 1980s show a track with cheap and powdery ballast and lots of weed on sidings. This is the look we wanted, particularly in Clermont which should represent a backwood end of the line. 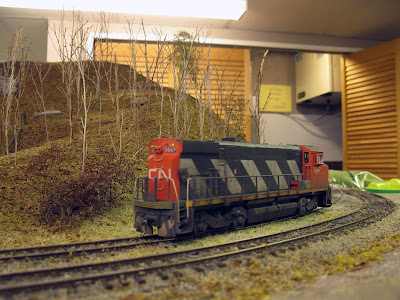 Static grass of various colors, olive-colored ground foam and shreaded leaves and other vegetal debris were used to add some variation. 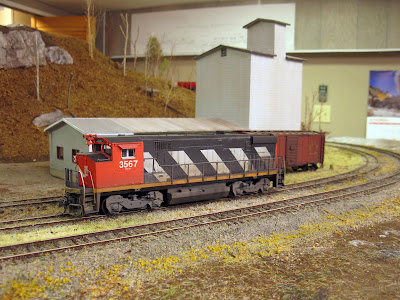 We went quite overboard with static grass over the team track. The idea was to have a semi-buried in gravel track near the loading spot and lots of grass at the feedmill to show how little traffic is generated by that small time customer. 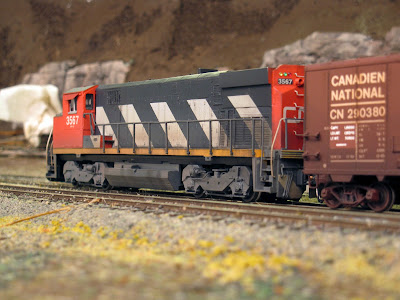 After that, I started to plant various trees in the hillside. I painted some of them to represent younger trees and installed a few dead ones here and there. I observed the nearby park recently and found out the level of dead or fallen tree is quite amazing in a forested area. Having been raised in the countryside, I remember the blaskened dead stumps here and there and tried to mimick that. As much as I could, I tried to plant a stump for each fallen trees of significant size to make it realistic. 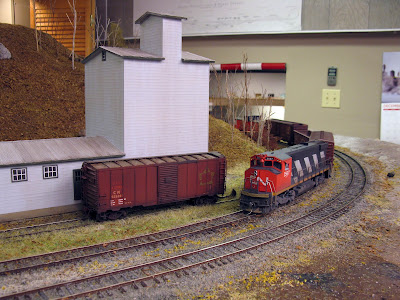 I also started to experiment with Super Trees. While nice for summer trees, it's a little bit tricky to make them look like credible early spring trees. I'm actually experimenting with light green foliage and paint. It's not perfect but once mastered, it should give depth to the wooden areas. I suspect I'll need twice as more trees on the hill than what I planted. 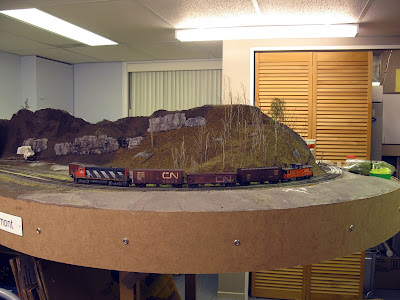 I used small broken parts of Super Trees to make bushes. Often, they have a reddish bark and I tried to replicate it with red primer and camouflage brown spray paint. I find them very effective to build up the vegetation near the right of way. Some flower "branches"  were also converted in rustic small fruit trees that can be found in the wild. I thought they were ugly, but with a coat of paint, they really look their part. 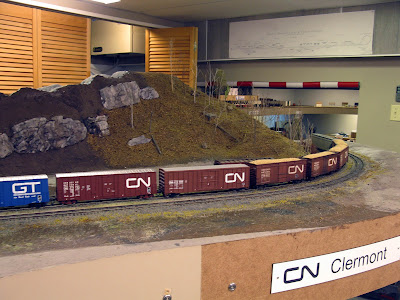 Globally, I'm well satisfied with the progress done in less than 4 hours. More vegetation is needed like tall dead grass and small yellow wild flowers growing over the roadbed. When I visited Clermont towo years ago, they were everywhere and made a neat impression. I've seen Trevor Marshall using a lots of flowers and weeds on his layout and modules and think they are a good way to bring depth and color to a layout when done tastefully. 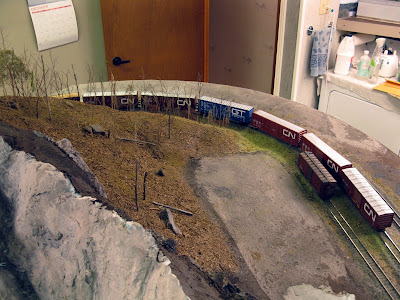 We must admit we choose a difficult time of the year to model. Yes, it is partly inspired by Mike Confalone, but we went a step further, just when the vegetation start to grow again. We did loved springtime, but wanted some life and coloration. As you probably figured over the years, it's not like me to do things the usual way and I prefer the challenge of doing what nobody does. 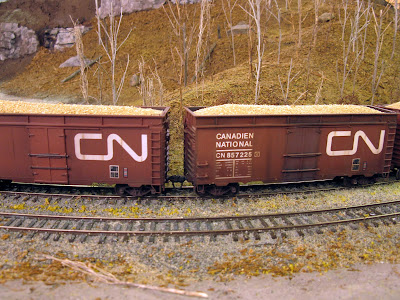 I must admit the scene is coming together perfectly and the weathered cars and locomotives now look awesome with some decent scenery. There is still a lot of work down the hill, but the peninsula is already starting to look like a signature scene to me and that's great because it is the first thing every visitor see when entering the layout room. 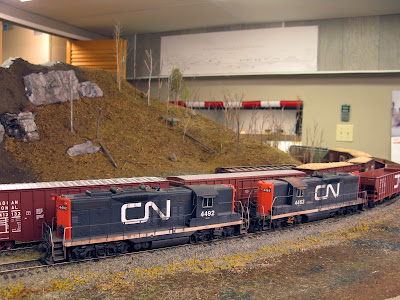 Meanwhile, we are running out of supplies and Louis-Marie cooked us a big batch of dead leaves! 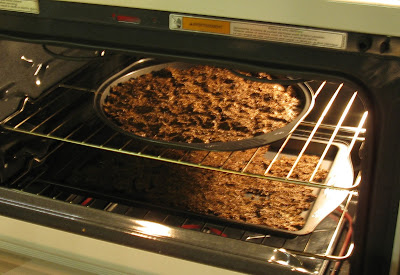 Posted by Matthieu Lachance at 10:18 PM