The boxcar is now ready for the paint shop. Details are from various manufacturers or simply scratchbuilt. I took some liberty with the prototype thought. Back in the early 1980s, these cars were rebuilt without roofwalk (which I did) but also with added reinforcing structural members on both ends. Richard Yaremko refers to them as "borg" cars for there similitude with Star Trek characters. 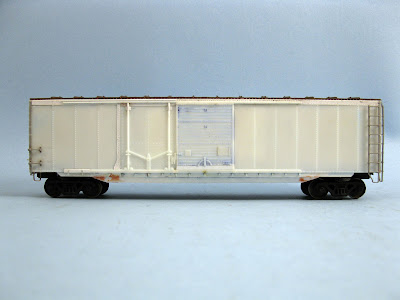 While it would have been a worthy modelling challenge, I felt these modifications were far too distracting for a model I want to be as generic as possible. The borg ends would have stood out from the rest of the fleet of boxcars, which isn't my goal. 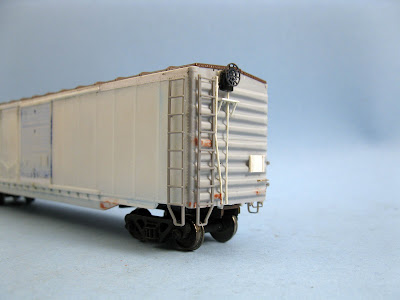 I can say I'm more than happy with the result given the serious discrepancies plaguing the original model. Give, I invested about $5 worth of parts, many from the junk box + $5 worth of decals, I would say this is a worthy kitbash. However, I wouldn't buy any other IHC boxcars because at the end of the day, very little original parts from the model survived the surgery. That said, I'm always impressed by the amoutn of satisfaction I can get out of these conversions. I'm no Proto87 guy and my method are somewhat rough and not always following the established conventions, but I feel great when the trains I build up on the layout have a significant amount of my work in them. The seem much more real to me than a high quality RTR model, probably because they have their own history just like a real car. 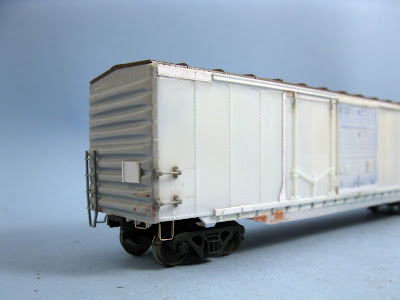 Meanwhile, I'm also working on 3 other cars which will be documented in other posts during the next weeks.

By the way, I'm actively looking for old CN insulated boxcar decals. CDS and Beavercraft issued some of them back in the days, but they are quite hard to find even on the second hand market. I'm always open to buying CN wet noodle decals and dry transfers, so feel free to contact me. I'm also looking for for cheap 40 ft boxcars with 10'6" interior height for further conversion.

Posted by Matthieu Lachance at 9:20 PM