Kitbashing on a Budget

As you know, I'm actually workig on a bunch of kitbashed boxcars. My big problem is that I need 10'6" inside height boxcars but I only have old MDC and Athearn cars which have a 10'0" IH.

My first idea was to see if I could find cheap cars to kitbash, but it is not a worthy venture. You end up replacing about 66% of the car with new parts anyway, only to keep the sides. When you think about it, the sides are the easiest parts to make from scratch. It's nothing less than riveted panels, something an entry-level modeller could pull off without effort.

Thus I decided to see if I could make something out of styrene sheet or paper. Finally, I tested an idea using 0.25 mm thick styrene sheet. I'm pretty sure it would work with 0.5mm styrene too. 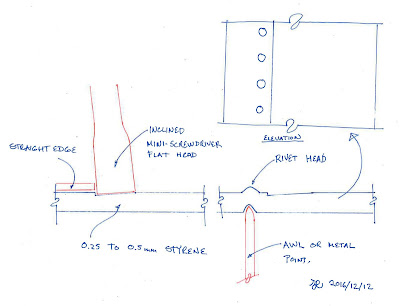 The idea is simple, you mark off the panels then, using a straight edge, you use a large flat screwdriver to scribe the panel lines. The trick is not to make a notch, but rather to press down the styrene on the side of the screwdriver against the straigth edge. In other words, you apply pressure "diagonally" with the flat head. In this way, you can fashion the overlapping profile found on riveted panels.

Once the panels are "scribed", you only need to use a fine metal awl, point or punch to emboss the rivet. I keep a 1mm distance between each rivet and it looks good. One could make them closer or even use resin decal rivets like Archer too.

Once painted, it looks convincing and the thin sheet of styrene can be glued on a thicker sheet that will give strenght to the car side. 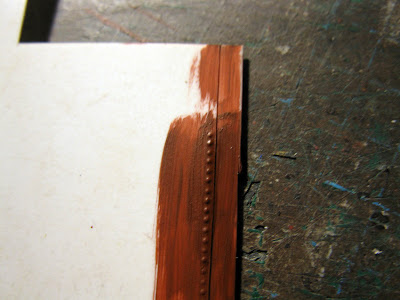 Now, when you think about it, given Intermountain roofs, boxcar ends and underframes can be found at $1.50 each, for about $4.50 and maybe 1 hour of works, you've got a nice boxcar shell ready for superdetailing. Then you can add about $5 of details, use Accurail trucks which can be bought in bulk, metal wheels and Kadee couplers. Such a project would cost between $15 to $20 dollars when done and can be tailored to replicate any prototype you want.

Sure one can argue you can find good deals which is true. However, most of the time, you have to substantially alter RTR or kits to fit the prototype. Given you can simplify the steps by building it "correctly" from "scratch", it is an interesting alternative. Particularly, if like me, you want to have detached ladders and grabs. Canadian modellers know well that modifying a costly RTR model isn't the most economical way to build a fleet, except if the said RTR model is so close to the real thing going another way would be a pure waste of time and money.

Building from scratch or using cheap cars as a starting point isn't always the best option, but it's good to know there are alternate ways to address the same problem. I don't know if that era of showing off on social media everything we can buy with our paycheck is making us dumber as modellers, but I certainly convinced most people are skilled enough to tackle that kind of modelling challenges that require basic tools and materials.
Posted by Matthieu Lachance at 8:51 PM