If a company ever had the most misleading name - until the Proto 1000 & 2000 brand - it was Life-Like which models were most of the time less than life-like... I remember I didn't like their cars when I was a kid, preferring Bachmann cars which were slightly better looking and running. But well, they were at least more preferable to Model Power and IHC. 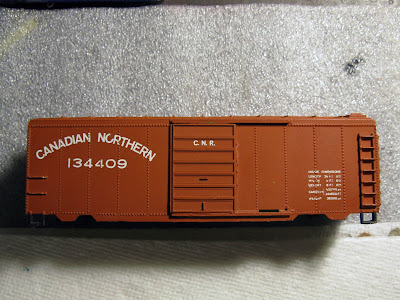 When we started the club in 2006, we went to a flea market and bought a lot of cars. Among them was a poor model of intriguing lineage that had been repainted in the old Canadian Northern scheme. Sure I new it was a foobie - and a bad model too - but I felt some sympathy toward it and made the purchase thinking I could do something one day. 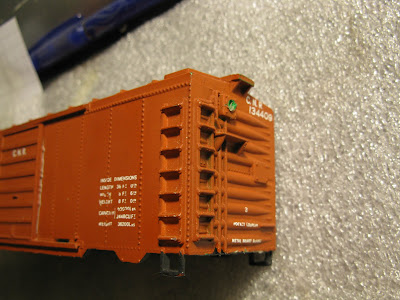 Last week, when looking again at that model we never ran, I found out the door was a good quality one glued on a Life-Like shell. But the weirdest discovery was the underframe wasn't the original one but something else from an unnamed different maker. It means someone went out of his way to make this model slightly better than it was... 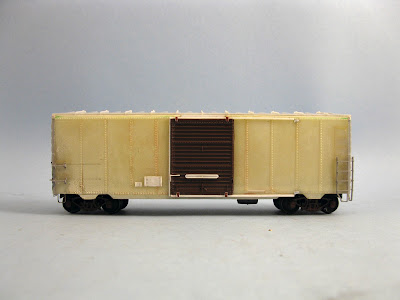 Since I had Youngstown 8' doors on hand, I decided to improve this model by replacing the doors and taking advantage of it's 10'6" interior height. But at the end of the day, only the car sides and underframe remain, everything else was scrapped and replaced with Intermountain parts. At this point, I could have made my own car sides and it would have been faster and more accurate! Fortunately, the improvements didn't cost a lot. 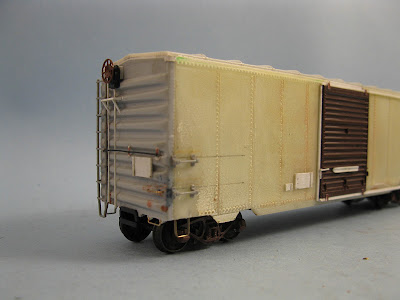 Among the obvious modifications, I added a forklift bar to the door, new tracks and experimented with a different pattern of ladders and grabirons on the ends. To do so, I decided to experiment forming fine plastic rod out of sprues heated over a candle. This isn't an easy to master technic but it is useful and I think some practice will make it more efficient.

Now the model is in the paint booth and I hope to decal it before Christmas if possible.
Posted by Matthieu Lachance at 9:34 PM