As you know, we recently received a nice handlaid curved turnout for Clermont. While the turnout itself was well made,  the guard rails were insufficently spaced from the stock rails. After some careful filing, it was able to handle 4-axle locomotives without problem but with 6-axle ones it was still problematic. While we wouldn't have cared, Murray Bay was indeed served by such engines (GMD1 and RSC-24). 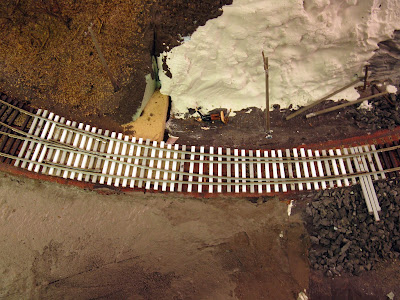 We thought we were better to let that issue aside for a while and Louis-Marie examined what he could do. Finally, he felt confident enough in his soldering skills (he's an electronic guy after all) to move the guard rails. We were a little bit afraid of destroying the turnout, but after a few minutes and with the help of custom jigs, the promptly corrected. 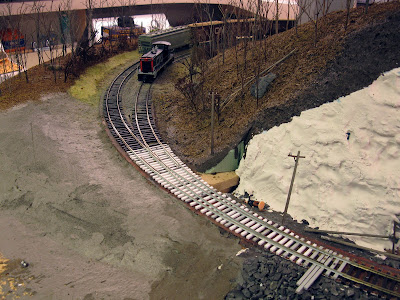 I'm now happy to report the 24"/20" radii curved turnout can now handle big power like M630C and, indeed GMD1. Styrene ties have been glued and soon a nice coat of camouflage brown will bring it to life.
Posted by Matthieu Lachance at 8:46 AM