When I started my RS18 madness project back in 2013, the layout theme wasn't centered on CN Murray Bay Subdivision but rather CN Limoilou yard and Bridge Subdivision. Back then, I purchased 4 Atlas RS11 (new tooling), one Kato/Atlas RS11 and one Proto 1000 RS18. Of them, only 3 were converted even if the others were partially bashed. 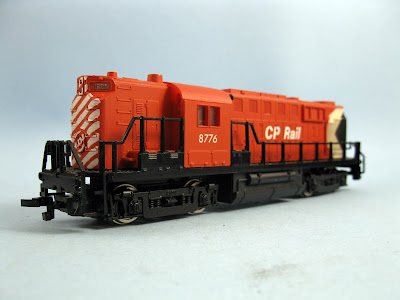 Shift in interest and operation made the whole project more or less a priority and my efforts were put on completing my M420 kitbash. However, a recent discussion with Jérôme about the possibility to sometime backdate the layout to the 60s and 70s gave the needed impetus to push this project toward completion.


Meanwhile, a new locomotive entered the fleet as a Mehano CP Rail RS11 that was own by Louis-Marie's brother-in-law. The model is far to be stellar in term of accuracy, but I had enough parts on hand to significantly improve it. While and experimental unit, I do plan painting this one as a dilapited green & gold CNR unit. It is important to note that the original CNR RS18 had were far less customized than units generally bashed by most modellers (CN wet noodle or zebra). When shopped, louvers and grilles were altered while the original were far closer to a RS11 than you would think. Don't be fooled by Exporail RS18 which is nothing more than a modernized version under a nostalgic coat of paint.


As people know, I'm also an impatient man. Since I want to make the minimal amount of modification but still a decent amount of prototypicalness, my units will all be numbered in the 3600 series which shared the same battery boxes and handrail arrangement than RS11. I seriously see no need to replace delrin handrails with brass ones. 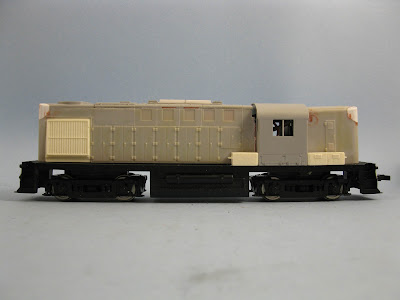 Also, when I did some shopping for detail parts recently, I was shocked by the ludicrous increase in cost. Generic parts like 3-horn chime and Pyle headlight now cost more than rebuilding a cheap boxcar with Intermountain parts. And as always, most parts are always out of stock which is probably even more irritating.


Since I had a Smooth-On Mold Max 20 kit sitting on my shelf, I decided it was time to replicate parts in resin. While recasting a 3-horn chime is a little bit too much, I settled on Pyle headlights - which are constantly required when bashing diesel locomotives - RS18 numberboards and  RS32 louvers (because they are better rendered than Atlas RS11 ones which are extremely crude). 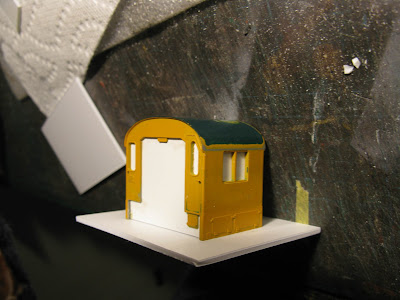 The result was far beyond my expectation thought I can see room for improvement. Thus I decided to recast an entire RS11 cab and to replicate battery boxes. All of them will be used to improve the Mehano shell. 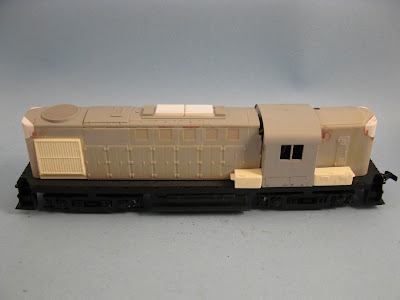 Once again, I'm satisfied choosing the hard way to do things. I love to build locomotives and I'm glad these little engines were ready to be improved. As much as I advocate restrain in collecting, I'm still a model builder at heart and trying to replicate locomotives that operated over Murray Bay Sub is within the frame I set for myself.
Posted by Matthieu Lachance at 8:30 PM